To accompany the trail moving image or film works will also be Geo-located to site specific locations as permanent features of the trail. This feature will be coming soon. The films can be watched by clicking the links highlighted below:

The Cathedral Illuminated – this was a 2 day large scale projection event onto the West Front of Lichfield Cathedral. The 40min show was repeated 6 times each evening drawing a crowd of around 6000 p 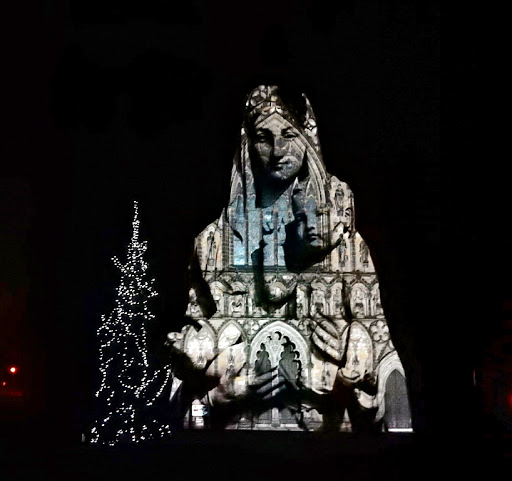 Moonlight – Moonlight assembly is the first of two large scale projection events for 2016 in Lichfield celebrating the 250th anniversary of the founding of the Lunar Society, the influential body of intellectuals, inventors creatives and other who met in the city and who’s concepts changed the world. The meeting of the Lunar society is central to the story of the city.    Moonlight

Mine – A short film developed as a tribute to the miners of South Staffordshire. Created and geolocated next  to the SCAMP Burntwood Miners Memorial Statue. – Mine

“Johnson at 300” was a 2 hour Son et Lumiere created by externalGalleries artists, Peter Walker, David Harper and Andy McKeown as a reflection on the life and work of Dr Samuel Johnson. Commissioned by Lichfield Town Council. The performance was watch by over 1000 people on the 19th September 2009. This is a 15min recap of the event.
Location – Market Square
Johnson at 300

“Wordplay” was created by Peter Walker and David Harper. It features 1500 people from the local area of Lichfield reciting every word in Dr Johnson’s original Dictionary.
Location – The Guildhall
Wordplay