On Saturday the 13th June, over 300 people gathered on the second anniversary of the unveiling of SCAMP, the Sankeys Corner Miners Statue in Burntwood, to take part in the dedication of a plaque containing the names of over 105 local ex miners. The plaque has added the names to over 250 ex miners already dedicated on the Statues Plinth. The statue was originally designed by local man Peter Walker, in honour the miners who helped found the town. 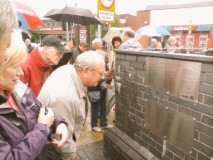 The dedication also saw the launch of the 150th Burntwood Wakes in the area, which this year have a new look and feel. Rather than based across the traditional 2 day weekend in August, the Wakes will feature events across a number of months in the town, enabling more people to participate. The Wakes originated as a festival created by local miners 150 years ago at St Annes Church in Chasetown, which is also 150 years old this year. It was a fitting ceremony and event to bring focus on how communities gather and celebrate their heritage.

Chairman of the Burntwood Town Council Pam Stokes gave a touching speech thanking the miners for their dedication, this was then followed by a blessing by Rev Linda Hood, before being played out by Rugeley Brass Band.

The band continued to played on through the day with the Library converted into a community hub, gallery and arts centre for the day. Local groups had stalls and craft available. A free bouncy castle and face painting was also available for the kids. In total around 1000 people attended the fun day event, which ran between 10.30 and 4pm.

“This was all made possible by the Peter Walkers project The City of Sculpture with additional thanks to the local town council, Burntwood Library, Burntwood Heritage Group and Burntwood Business Community who provided fantastic support to the project”.

“Since it was unveiled in 2013 by my predecessor, Ron Bradbury when he was Chairman of the Town Council, SCAMP has become a visible symbol of our community and heritage. Of course, Ron Bradbury had always been the driving force behind the project to get a meaningful memorial and tribute to our local heritage, raising funds and awareness for years before this beautiful sculpture was unveiled. Today is the start of the new Burntwood Wakes Festival, a new way of celebrating our community throughout what I hope will be a wonderful summer! This year, Burntwood Town Council has changed the way we are holding the Wakes Festival to let our local community groups have more involvement and bring new ideas”. Chairman Pam Stokes

“Scamp has been embraced across the community, and that is key to producing art in public places. It is fantastic to see all generation engaging with the artwork. We must remember that this town was built on the mining heritage, and although there is no visible reminder of the many pits in the area, I trust this statue and the names which are proudly inscribed on the plaques will last for generations as a reminder of the routes of this community. Today its a different world, and in line with that we hope to bring many new art projects, using new technology as well as sculpture and and other art forms to the area. There is overwhelming enthusiasm for the projects we undertake in Burntwood and Lichfield and we will continue to develop opportunities wherever we can to create access to art in the area”. Peter Walker